THE PORTAL TO THENITIWAN & Giveaway

This post is part of a virtual book tour organized by Goddess Fish Promotions. Ada Stone will be awarding a $10 Amazon or B/N GC to a randomly drawn winner via rafflecopter during the tour. Click on the tour banner to see the other stops on the tour. 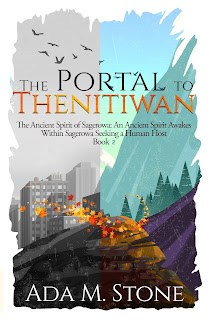 Over 9,000 years ago, an ancient spiritual energy leaks through a link in time entering Thenitiwan, destroying the barrier between the past and future. The spirit enters a host or Hawopas to block the portals spiritual gravity through carnal energy of a living body to survive.

Over the centuries, a powerful civilization called Sagerowa emerges knowing that history favors the rise and death of great nations throughout time. Sagerowa eventually gained control of the gateway and entered future eras and destroyed them to weaken them and sought to freeze their era in time forever.

Many years later in the midst of the tension of the nation's most recent war, Joie tries to return home with the assistance of Xuca who escorted her to safety. Xuca however is unable to look after her and be loyal to his goals and let her go as a priority. She soon finds comfort and resolve in a stranger named Keogx from the pain of missing the soldier she felt had her back and unknowingly more parts of her heart.


Read an Excerpt from Book One:

The unknown intruder uttered something but it sounded distorted and unclear to Joie because her consciousness was fading. Then everything went black and she couldn’t hear, feel, or see anything.

Then the sound became more and more distinct and she heard someone call her name, “Joie…Joie, can you hear me. Joie.”

She groaned and said, “Who’s there?” She was lying on the ground outside the cave and Xuca was sitting on the ground by her side, leaning over her. “Hey, wake up,” he said patting her cheek. Then she abruptly sits upward with a scream that frightened him. She said, “Get away! Don’t touch me!” She was about to swing her fist at him just before he caught it and said, “Stop, Joie, it is me, Xuca.” She gasps and says, “Xuca?!”

Then he slowly places her hand down and says, “It’s ok. I am not going to hurt you. I was looking for you. I was worried you’d get hurt.”

She realized it was Xuca from before from the shop where she last seen him. Joie was slowly beginning to feel a slight feeling of safety and comfort now that he was here. She barely knew him but knew that she needed him for protection. Then she said with hesitation, “Thanks for saving me…thank you. I didn’t know what to do back in that cave.” Then she lowered her head, “I don’t even want to think about what would’ve happened… if it weren’t for you. Thank you…oh, thank you! Whoever was after me, I am sure glad they’re gone.”

With a chuckle he said, “You are welcome, but that was me who was approaching you in the cave, Joie.”

She looks up at him and had a surprised look on her face.

“You were unconscious… so… I looked after you,” He said.

Then she said with regret, “You…you went out of your way… for me…why? Especially after the way I treated you...when you only tried to warn me?!”

Then with a slight guiltiness she said, “I am sorry, Xuca… I am sorry I didn’t believe you. I am so sorry I doubted you. I…just need your help.”

Then she said with a sorrowful whisper, “Please forgive me.”

Her black hair hanged over her face as she bent her head down.

He stares at her with sympathy.

Then she said, “I have now seen enough of this place … to not take your word for it.”

She felt a humbling feeling come over her that started from a spark but grew into a fire.

He little by little lifted up her chin and said, “Calm down now, you don’t have to be sorry… I mean it’s not like I totally explained to you what I was trying to say. It wasn’t your fault, Joie.”

She looked him in the eye and was touched by his forgiving words. Then she said, “Thanks.” He smiles then tenderly removes his hand from her chin.

After she tries to recollect her thoughts and remember what happened before she fainted she said, “Xuca…I just remember. I saw some people the other day, they dressed something like you, but not quite. And one of them spoke in hatred of you. He said he was on a mission to kill you.”

Xuca replied, “The Tusk Spears of the S.O. It’s got to be them. They are finally on the move...again. They are up to no good as usual. They want to destroy time.”

“Time…What do you mean?” She asked. Then she added, “I am confused.” She was looking into his eyes questioningly for a while.

Then he began to think of something that was on his mind.

“Listen…maybe you can stick by my side. I’ll protect you. And I’ll gladly answer all your questions. Besides, I could use the company,” he said. Then he stands up and reaches out his hand with a smile to help her stand up. She looks at his hand for a while then up at his face. She wasn’t completely sure about this.

Then he said, “Its ok…you can trust me”. Then she slowly reached out her hand with hesitation and he took it and pulled her up on her feet.

“Follow me” he said and begins to walk along a trail.

She watched him carefully and thought to herself, “Never thought I met a guy like him…..or end up in a place like this?! Looking up into the sky and the trees she was thinking life can be so unpredictable.

She stood still and pondered for a while. Then she ran and caught up to him before she lost him. She walked right by his side and felt safe… and proud of the fact that she had someone that she could possibly call her friend.

About the Author: I am Ada Stone and have been writing since high school and interested in societal problems and of course, fiction. The ability to make up a world and share it means a great deal as the real world is what it is.

a Rafflecopter giveaway
at December 05, 2019