TRUFFLE ME NOT Book Blast & Giveaway

This post is part of a virtual book tour organized by Goddess Fish Promotions. M.K. Scott will be awarding a $40 Amazon GC to a randomly drawn winner via rafflecopter during the tour. Click on the tour banner to see the other stops on the tour. 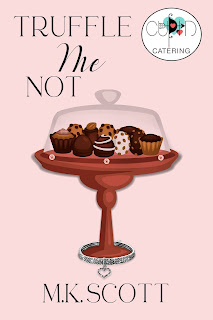 The future of Cupid’s Catering Company hangs in the balance. With a rival bakery, owned by the queen of all mean, rich girls, Della is at a distinct disadvantage.

Della hinges her financial future on winning the local truffle contest. As if there wasn’t enough on her mind, additional problems arise, including missing cats, jewel thieves, and her desperate attempt to find the incredibly kind man who’d lent her hand when she had tire trouble.

Can she solve all these problems and find time to whip up a cookbook at the same time?

“Cupid’s Catering Company and Bakery.” Della made sure to tack on the last part because the company’s name misled people who were looking for a bakery.

“I need a caterer for a wedding.”

“Sure.” Della cradled the phone between her ear and shoulder, picked up a pen, and glanced at her wall calendar. “Okay. We’ll need to schedule an appointment where we go over the number of guests, venue, date, and if there’s a kitchen onsite along with menu selections.”

A lengthy pause from the end made Della wonder if the call had dropped. Right about the time she decided to hang up, a breathy voice said. “December 24, this year. A Christmas wedding. It’ll be so beautiful. I’ll have marabou fur on my dress just like a certain singer.”

Della didn’t know any singer that went around dressed in marabou fur, but then again, she didn’t know any professional singers. What she did know, while a Christmas Eve wedding sounded romantic, it didn’t ring any bells for the attendees. Most folks would rather be spending the evening with their families. There was also the issue of no churches being available. Other venues would be closed for the holidays or hosting seasonal programs. “Do you have your venue already booked for the twenty-fourth?”

“Venue?” The caller echoed the word as Della stretched the phone cord to see how far it would go. It barely reached the commercial fridge, which she opened with one hand. Her fingers curled around a foiled covered oversized cookie sheet filled with premade chocolate chip cookies, waiting to be baked. Thank goodness she always planned ahead. Yesterday, she’d prepped for a rehearsal dinner and the Saturday morning rush. She didn’t, however, build in extra time for shopping for cat collars or brides that called before eight in the morning. Technically, she shouldn’t have answered the phone. Della transferred the tray to the island since she’d have to open the double doors on the convection oven before she could slip them inside. She needed to pin down a date for the unorganized bride to be. Something about weddings could turn perfectly ordinary women into demanding divas, and occasionally the groom became the one who believed his perfect wedding should be featured on the evening news.

About the Author: M. K. Scott is the husband and wife writing team behind The Painted Lady Inn Mysteries and The Talking Dog Detective Agency. Morgan K Wyatt is the general wordsmith, while her husband, Scott, is the grammar hammer and physics specialist. He uses his engineering skills to explain how fast a body falls when pushed over a cliff and various other felonious activities. The Internet and experts in the field provide forensic information, while the recipes and B and B details require a more hands-on approach. Morgan’s daughter, who manages a hotel, provides guest horror stories to fuel the plot lines. The couple’s dog, Chance, is the inspiration behind Jasper, Donna’s dog. Overall, both are fun series to create and read.